A Note From Our President

The Community Sew Day was held at the Anchorage Senior Center on October 6 and a room full of stitchers cut and sewed over 200 fleece hats. I delivered about 30 hats each to The Children’s Place and to My House for homeless teens in the Valley. The rest of the hats were distributed to several shelters in the Anchorage area. The folks I delivered to were both very grateful and appreciative.

The Fall Retreat was October 30- November 4 at Pioneer Ridge Bed and Breakfast. The pictures posted on Facebook look like a lot of folks completed some beautiful projects. There were also a number of fleece blankets tied and Donated to The Children’s Place. Thank you all for your generous response to that need.

The meeting at the Retreat included some things you should be aware of. Megan Cate has served as Superintendent for the Sewing Department at the Alaska State Fair for the past 3 years and has organized and represented us very well and we so appreciate her work in that role. Kirsten Tysver is going to take on that responsibility for the upcoming year. She is in need of an assistant and we are open for volunteers.

The Christmas Party for the Guild will be at Rae Longbrake’s house on December 1 at 12 Noon. Her address is 1201 Grover Lane Palmer, AK and her phone is 907-863-0800. Please bring side dishes according to your birth month. January-March: Appetizers, April-June: Sides, July-September: salads, October-December: desserts.

We will be doing a white elephant gift exchange (something you have laying around the house) and collecting cash donations for the Salvation Army angel tree program.

After we have recovered from Christmas, there will be another Sewing Retreat in the Spring.  We will get the dates to you as soon as they are confirmed. The Bed and Breakfast will have a rate increase next year, and they wanted to let us know ahead of time to expect that.

Last but probably most important, there will need to be a new President and a new person to manage the Newsletter for the coming year. We can provide all kinds of support, training, motivation and encouragement, but Molly and I are both stepping down and it might be you who could step up and take on a new role for the Guild.

The Chapter Advisory Board will be meeting sometime before the December Christmas Party, so look for other news and updates next month. Have a blessed Thanksgiving and we hope to see you at the Christmas Party! (if you don’t show up, you could be elected President or Newsletter Editor!!)

We hope you’ll join us for our rescheduled annual membership meeting, potluck and optional white elephant gift exchange. To join the gift exchange, bring something from your home: no fair buying something new!

For this potluck, Rae will be providing a tasty ham and yams (sweet potatoes). Please bring a side dish according to your birth month: 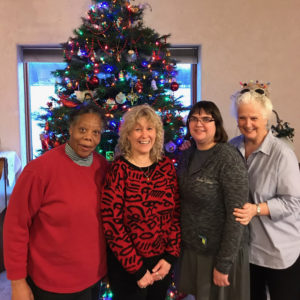